Banned Booksellers Week is over early. After a three-day protest by 580 booksellers in 27 countries, the Amazon subsidiary Abebooks.com reversed its decision to withdraw from the Czech Republic, Hungary, Russia, South Korea, and Poland.

Following a meeting between Arkady Vitrouk, Abebooks’s CEO, and Sally Burdon, the president of the International League of Antiquarian Booksellers (ILAB), Burdon released the following statement: “It is with great pleasure I report to you that the booksellers in the Czech Republic, Hungary, Russia and South Korea will be able to continue to trade on Abebooks into the future if they wish to. They will not be cut off this month nor in the future.” Other affected countries, including Poland, will also be allowed to continue to participate on the Abebooks platform.

Antikvariát Valentinská, one of the largest antiquarian booksellers in Prague, had expected to lay off as many as five employees if Abebooks had gone through with its plans. Following Burdon’s announcement, the owners, Jan and Ondrej Schick said, “You have achieved something we have only dreamed of: You have demonstrated that virtues like selfless solidarity and support have a value beyond the interests and decisions of a company however large it may be.”

Adam Bosze, the president of the Antiquarian Booksellers’ Association of Hungary (Magyar Antikváriusok Egyesülete), concurred: “I would like to express my deep gratitude for your effort changing directions at Abebooks. I would not have thought that we’ll succeed, but you showed the real meaning of our motto,” Amor librorum nos unit (the love of books unites us).

New York Times story on the Abebooks protest. Republished in the Boston Globe and Seattle Times.

Rare Booksellers Rallied Against An Amazon-Owned Company and Won

In response to Abebooks’ action, the Antiquarian Booksellers Association (UK) cancelled Abebooks’ sponsorship of the London international book fair in 2019.

We’re excited to release our 33 list, on Social Movements of all kinds, from wacky to world-changing.

This may be the reason for you to get on social media if you are not already there.

We recently opened up a page to view some of the wonderful books that come through our shop every day.

So check it out and come by the shop in real life to see these rare books in person.

The Los Angeles Times’ editorial board called it the worst of the 1000 bills passed in 2016, referring to it as “one truly horrible law” and writing, “This bill never should have passed. The Legislature must fix or repeal it immediately when it resumes business.” So let’s get to it!

As a fitting cumeuppance, the author of the law, Ling Ling Chang, was defeated in her quest for re-election. Here are the bill’s sitting co-sponsors:

1. Most Californians Are Harmed
Nearly everyone in California has a signed item in their possession: a signed book, a piece of art, or perhaps a signed baseball from their childhood.

Under AB1570, when a California consumer sells a signed item worth $5 or more to a reputable dealer, to an art gallery, or via auction, the consumer’s name and address must be included on a Certificate of Authenticity (COA) accompanying it.

This requirement is both an invasion of privacy and represents a danger to the seller, as the COA provides a literal road map for potential thieves.

The law offers not accommodation for items sold to dealers before the law went into effect, thereby retroactively changing the expected privacy of previous transactions.

2. It Partially Repeals the Landmark Reader Privacy Act
The Reader Privacy statute prohibits booksellers from revealing the reading habits of their customers unless compelled by a court order.

AB1570 now requires some booksellers to disclose the reading habits of customers who sell, donate, or otherwise dispose of signed books. The autograph law unintentionally weakens the Reader Privacy Act.

Michael Risher, a lawyer with the ACLU of Northern California, told the New York Times, “The law is an invasion into privacy and should be amended.”

3. The Law Exposes the Very Consumers It Intended to Protect to Lawsuits
For purposes of this law, a “dealer” is defined to include California consumers who sell signed items at auction (Dealer includes … “persons who are consignors … of auctioneers.”)

Any consumer who sells a signed item through an auction house is a consignor and therefore by definition a dealer. When a dealer fails to supply a COA, they are subject to civil action under AB1570.

4. It Compels Auction Houses to Reveal Their Consignors
All auction houses are covered by AB1570, whenever they sell a signed item. In addition to requiring a COA from each consignor, AB1570 requires a second COA from the auction house itself. This COA must include the name and address of the source of the item (the consignor). This provision would cover estate auctions, auction sales of signed artwork, signed books, or signed entertainment memorabilia.

Confidentiality of consignors is a tenet of auction houses. The New York Times recently quoted a representative of Bloomsbury Auctions as saying, “one of the fundamental cornerstones of the auction world is our client’s privacy.” Not anymore; not in California. This puts California auctioneers at a distinct disadvantage.

5. New Bookstores Seem to Be Covered By the Law If They Sell Online (and they all do)
Many aspects of AB1570 are maddeningly vague, but this is the single worst sentence in the single worst law of the year:

Dealers, to whom the law applies, “includes a person engaged in a mail order, telephone order, online, or cable television business for the sale of collectibles [signed items].” (1739.7(a)(4)(a)).

There is a temptation to read “engaged in business” as primarily in the business, but engaged is, in fact, a much lower threshold, that is met with even a small volume of business. Businesses primarily engaged in the selling signed items are covered by other sections of the law, so presumably the legislature meant to extend the law to a much broader group of online sellers.

It should be noted that once someone meets the definition of dealer that all signed items sold by that business must have COAs.

6. Seven Years of Recordkeeping Is Ridiculous for a $5 Item
Dealers are required to keep copies of the COAs they issue for seven years and they are required to issue COAs for items priced at as little as $5.

7. AB1570 Hurts Book Fairs and Art Shows
Out-of-state dealers are required to comply with the autograph law when exhibiting at shows in California. Show promoters are required to notify dealers that they are subject to legal action for failing to comply. Already, this law has caused two dealers to cancel participation in the 50th Annual California Antiquarian Book Fair. The law will also deter out-of-state art dealers from exhibiting in California. This will ultimately hurt collectors.

We have just published our first catalog of Isaac Asimov first editions. You can download a pdf of the printed catalog now, or view it on the web, with every item illustrated with photos. We will be publishing additional lists of books, as we get them catalogued. Please visit our Asimov homepage for the lastest info, or simply swing by the store.

We are excited to present our newly acquired collection of British 1st edition Harry Potters in both the children’s and adult designs.  The books are unread and in fine condition.

Do you speak Latin?  We have a 1st edition Harrius Potter et Philosophi Lapis. Irish?  Come check out Harry Potter agus an Orcholch.  Welsh?  We have Harri Potter a Maen yr Athronydd.

If you speak English we have a lot to choose from.  All seven books plus The Tales of Beedle the Bard. Canadian 1st editions also available.

We just got in a huge collection of Marilyn Monroe books recently purchased from a private collector.  Our shelves are bursting with multiple copies of possibly every book ever published about the famous and tragic Hollywood star. So if you know any gentlemen who prefer blondes, or anyone who likes it hot, send them our way.  Don’t bother to knock, just come on in!

The collection also includes many books on fashion and photography.

This set of J. Fenimore Cooper's Works (10 volumes, published 1891), illustrated with wood engravings is getting cheaper every day. It started out at $145 at the beginning of the month. The price is currently just $30! and it drops $5 per day until someone buys it or we give it away free on the day before Thanksgiving. This set retails for $100-150, so it's a steal already. If you want it, hurry down!

A recent email from one of our readers who collects historic newspapers, lead me to a small cache of YouTube videos about two leading newspaper dealers, Timothy Hughes and the Mitchell Archive. Hughes is definitely the leading dealer in his field and has a great many newspapers in inventory. His business turns out to be a family affair that has taken over what used to be his father's machine shop. This video shows it to be ephemera dealing on fork-lift and heavy-lift scale.

Behind the Scenes at the Mitchell Archives


The Most Illustrated Bible

This from "Bible Editions & Versions," the Journal of the International Society of Bible Collectors (April – June 2008): 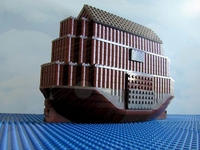 "The Brick Testament. Constructed and photographed entirely by the Rev. Brendan Powell Smith. The largest, most comprehensive illustrated Bible in the world, with over 3,600 illustrations (the scenes are made from Lego blocks) that retell more than 300 stories from the Bible. First launched as a website in 2001, then as a published book series in 2003."

I love how deadpan the description is. The "Reverend" Smith is hardly reverent. He is, however, obsessive, and pretty good with Legos.