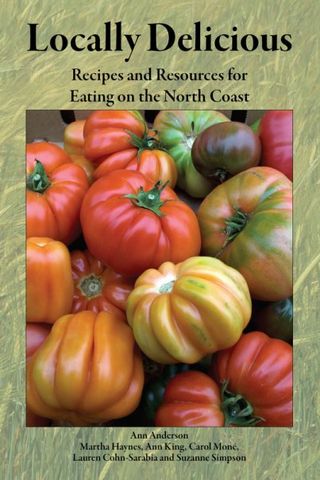 Arts Alive is tonight and we have the “Heirloom Tomatoes” and their brand new cookbook, Locally Delicious: Recipes and Resources for Eating on the North Coast, in the store from 6:00 to 9:00 p.m. This cookbook based around food grown in Humboldt County is illustrated in full color and has pages of resources for finding local produce and products.

On our art wall, we have some of the color photographs by local artists used to illustrate the book.

This is the last Arts Alive before Christmas and we expect a large turnout. Plus we’ll have free local and delicious food and beverages. We hope to see you there. (For the record, the Heirloom Tomatoes are Ann Anderson, Martha Haynes, Ann King, Carol Moné, Lauren Cohn-Sarabia, and Suzanne Simpson.)

Buy a copy from us online.

This set of J. Fenimore Cooper's Works (10 volumes, published 1891), illustrated with wood engravings is getting cheaper every day. It started out at $145 at the beginning of the month. The price is currently just $30! and it drops $5 per day until someone buys it or we give it away free on the day before Thanksgiving. This set retails for $100-150, so it's a steal already. If you want it, hurry down! 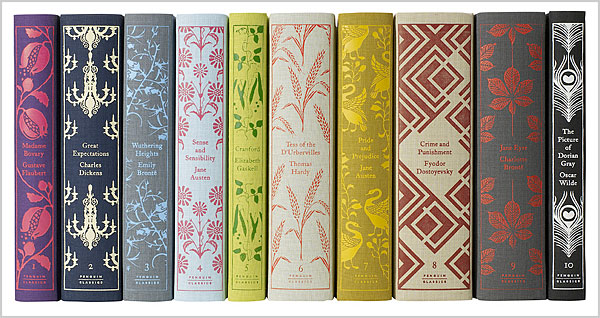 Just in time for the holidays, Penguin has brought out a limited-edition line of hardcover classics like Great Expectations and Pride and Prejudice. These are lovely books designed by Coralie Bickford-Smith, one of the hottest book designers working today. The books are nicely priced at $20 each. There’s a funny interview with Ms. Bickford-Smith on the Penguin blog, with lots of visual jokes and book humor (if you like that sort of thing).


It Was a Dark and Stormy Night

The Works of Edward Bulwer Lytton, complete in nine volumes, circa 1885. Lord Lytton is hardly a household name today, but he was one of the most popular writers of the late 19th century, famous for prose as ornate as the Victorian architecture of the era. He is not widely read today, but you know the beginning of the first line of a novel you’ve never heard of, Paul Clifford (volume 8 of this set):

“It was a dark and stormy night; the rain fell in torrents—except at occasional intervals, when it was checked by a violent gust of wind which swept the streets (for it is in London that our scene lies), rattling along the housetops, and fiercely agitating the scanty flame of the lamps that struggled against the darkness.” 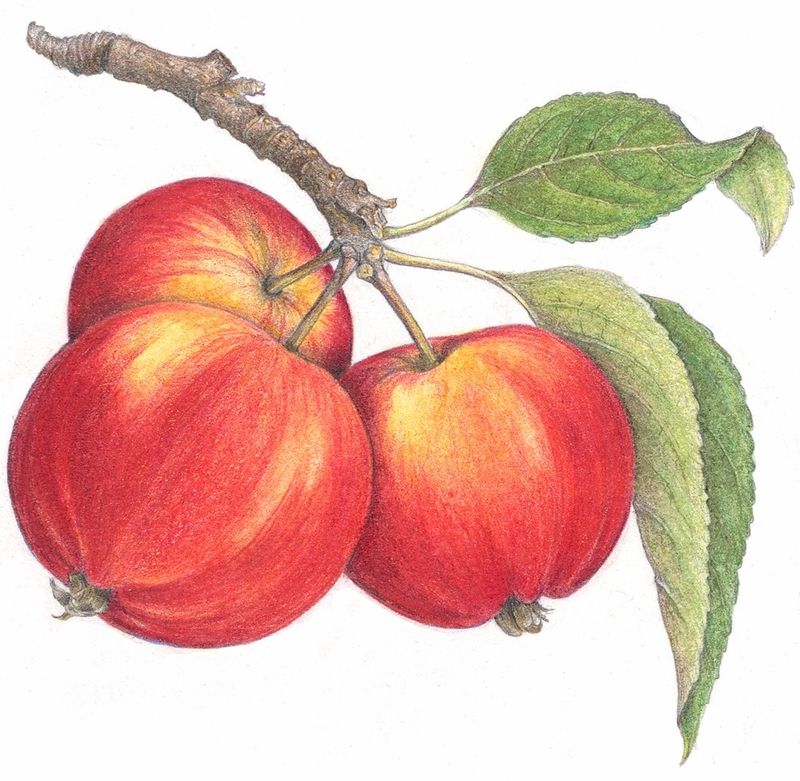 This is a preview of some of the new apple portraits we'll be displaying in November. These life-size color pencil drawings by Peggy Irvine depict heirloom apples from Humboldt County. This is our second show of Irvine's botanical illustrations, and once again, we're inviting growers to the store for an apple tasting on Saturday, November 7, from 6 to 9 p.m. (during Arts Alive). Last year, we had more than two dozen varieties of apples on hand. See you then!

Time: Is it true you own a bookstore?

Letham: Yeah. I'm part proprietor of a small used-book store in Maine. I don't
really own the building. I guess I sort of own the books until someone
comes along and buys them. I'm like the junior partner in a very funky
clubhouse of a used-book store. It's something that makes me very happy.

It seems like a defiantly optimistic thing to do these days, when all anyone can talk about is the decline of the printed form.

It seems like it should be that kind of gesture, but it never crossed
my mind that it was an expression of defiance. If it's taken as that,
that's great. I did it for the pleasure. It didn't have to do anything
with my career or the Internet or the publishing world. It was just to
be handling the books. I worked in used-book stores for 15 years on and
off. That was the only work I ever had before becoming a full-time
writer. I have a lot of osmotic book knowledge just from handling books
I didn't ever read. Turning them over in my hands, trying to figure out
where they came from and why they exist and whether they should be
priced at $4 or $6.

How do you figure out how to price a used book?
I'm supposed to say something like, "If I told you, I'd have to kill you." It can't be explained. You just have to know.

According to the Interweb intelligence, the store is Red Gap, in Blue Hill, Maine. It's alleged to have great espresso. The name comes from the 1935 film, Ruggles of Red Gap. Another part-owner is reported to be novelist Marjorie Kernan. [Unverified rumor-mongering sources: Puggy's Hill and The Stranger.]

Red Gap is the store's name, based on the 1935 film, Ruggles of Red
Gap, beloved by Jonathan and the other owners. The espresso machine
makes the best coffee in town, hands down.


Nubs on the Loose 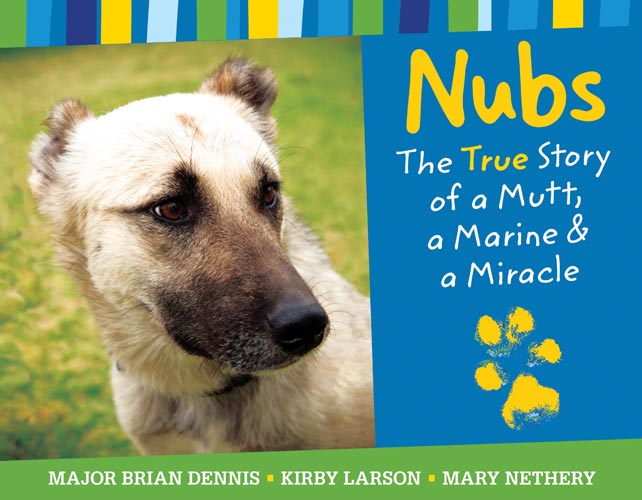 Eureka author Mary Nethery's latest children's book arrived today! Nubs: The True Story of a Mutt, a Marine, and a Miracle describes the adventures of an abandoned German shepherd in Iraq who adopted a major and followed his Humvee for 70 miles through the desert. When the marines said he couldn't keep the dog, volunteers raised funds to have his sent to live with Major Brian Dennis in San Diego. This moving story is illustrated with photographs taken of Nubs and Brian in Iraq and their reunion in the States.

We're decorating the store for Halloween today (it is the 13th, afterall) and we're putting out the typical books on vampires and ghosts, but what better season to display the creepiest item in the store: a 17th-century broadside from the Popish Plot in England.

Justice in the 17th Century: "To be hanged by the Neck, cut down alive, his Quarters to be severed…and his bowels burnt"

An Account of the Digging Up of the Quarters of William Stayley, Lately Executed for High Treason, for that His Relations Abused the Kings Mercy. London, Printed for Robert Pawlet at the Sign of the Bible in Chancery-Lane, 1678. 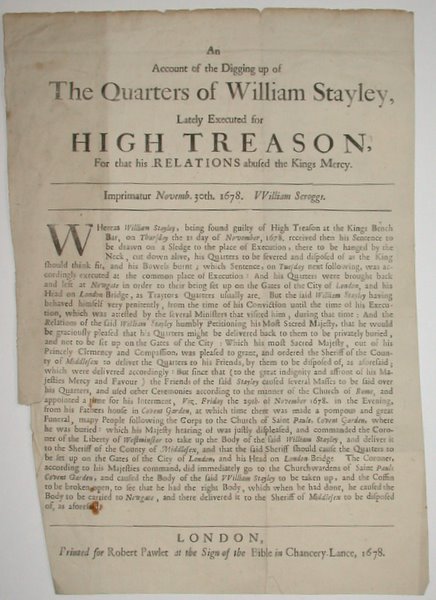 Broadside, 10 by 14.25 inches (253 x 360 mm). Imprimatur Novemb. 30th. 1678. William Scroggs. In 1678, rumors circulated in London that English Catholics, supported by the Jesuits, planned to kill King Charles II so his brother James, a Catholic, could assume the throne. In the end, nearly three dozen people were executed for treason, and William Stayley was the first unlucky soul. He was overheard in a tavern saying that Charles II "is a great Heretick, and the greatest Rogue in the World; there’s the heart and here’s the hand that would kill him."

Stayley confessed and according to this broadside, was "to be drawn on a Sledge to the place of Execution, there to be hanged by the Neck, cut down alive, his Quarters to be severed and disposed of as teh King should think fit, and his Bowels burnt; which sentence…was accordingly executed at the common place of Execution: And his Quarters were brought back and left at Newgate in order to be set up on the Gates of the City of London, as his Head on London Bridge, as Traytors Quarters usually are."

However, Stayley was very penitent and asked for the king's mercy, who allowed the execution to take place, but agreed to give Stayley's body to his friends for a proper burial. Stayley's friends, however, "caused several Masses to be said over his Quarters, and used other Ceremonies according to the manner of the Church of Rome and…made a pompous and great Funeral" at the Church of Saint Paul, in Covent Garden. 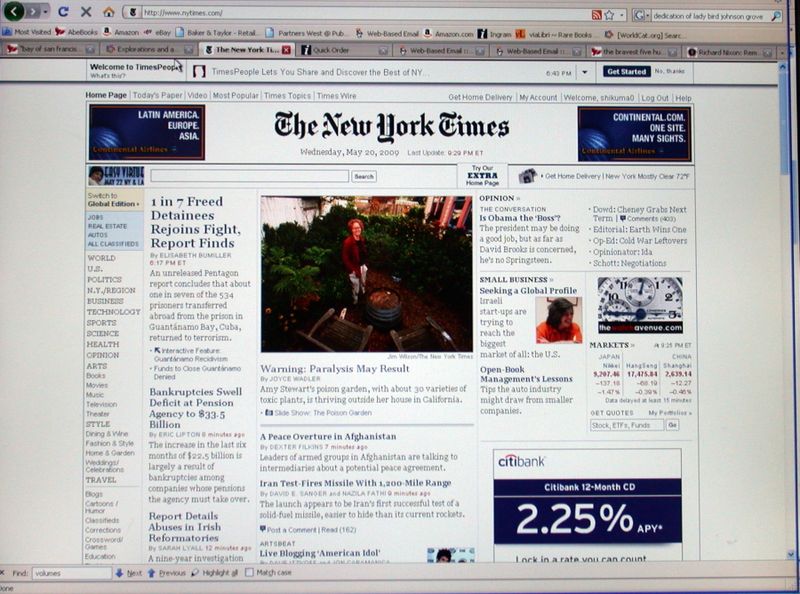 Imagine my surprise when I went to the New York Times website and saw local author Amy Stewart (and Eureka Books co-owner) on the home page. The story is scheduled to run in tomorrow (May 20). 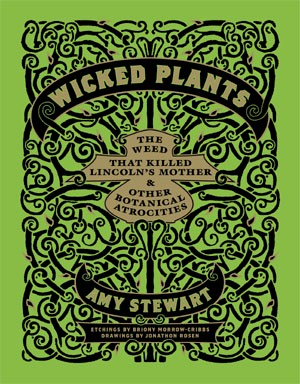 This week, Eureka's own Amy Stewart's Wicked Plants (signed copies available in the store now) is #25, and "on the rise."