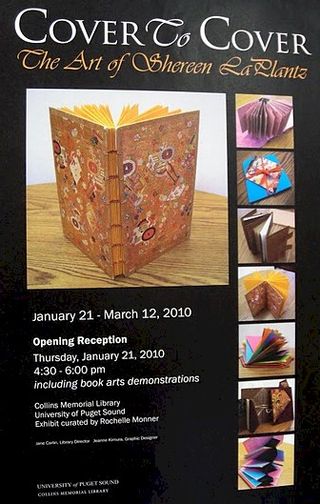 The late great Shereen LaPlantz, a multi-talented artist who specialized in the book arts (and weaving and jewelry-making) is having a retrospective show at the University of Puget Sound, through March 12.

See some of her work from the exhibit here.

Thanks to the North Redwoods Book Arts Guild (NORBAG) blog. LaPlantz was a founding member of the group. If you're out and about for Arts Alive on Saturday evening, drop in to see our show of paintings and photographs of the pulp mill. The mill is one of the industrial landmarks of Humboldt County, sitting on the bay on the Samoa peninsula, right across from Eureka. For many decades, the pulp mill emitted rather foul smelling sulfurous smoke from its towering smokestack. Environmental upgrades reduced the odor and a slack market for pulp that has kept the plant offline most of the time lately, greatly improved the air quality in town.

But for all its faults, the mill employed quite a few people and most landscape artists in Humboldt County painted or photographed it at one point. Since the mill manufactured the raw ingredients for paper, we asked Ellen Golla, past president of the North Redwoods Book Arts Guild (website and blog), to demonstrate papermaking with dried pulp. It should be a fun evening. 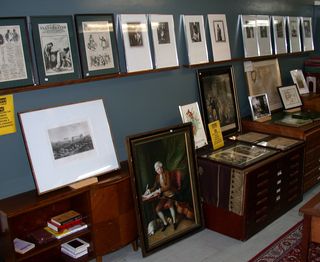 We need space so we're having a massive, epic print sale. Okay, that's a bit of hyperbole, but we have three dozen prints, mostly framed, that are as much as 90% off their marked prices. The oldest ones are from the 1700s. As these sell, we'll put more out, so stop in from time to time. 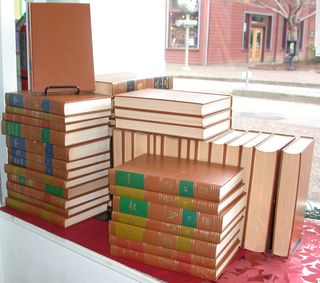 We have another Great Set Countdown going – this time we're offering the Britannica Great Books of the Western World set – all 54 volumes of knowledge, from Aristotle to Darwin. The way this works is that the price drops $5 per day until it's free. This set started at $140 on February 1 and on March 1 it will be free. Right now, it's just $95 (which is about half of what they go for on eBay). Tomorrow it will be $90, unless someone snaps it up before we close today. If you've wanted this set, don't wait too long! Sold on February 19 for $50!


Trinidad in the Times-Standard

A nice write up in the T-S today about Dione Armand's new book, Trinidad. She'll be at Eureka Books on Saturday, February 6, from 6:30 to 8:00 p.m. signing books and talking to folks about Trinidad history. 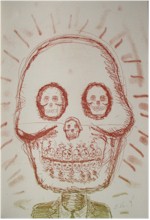 Jack and Scott left today for San Francisco, where Eureka Books will have its first-ever booth at an antiquarian book fair, in this case, the San Francisco Antiquarian Book, Print, and Paper Fair, held at the Concourse on Saturday and Sunday. We put together a list of some of our best material, and you can download a copy from our website. 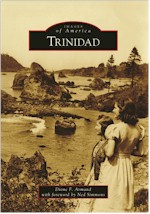 We're very excited to have Dione Armand signing her new book, Trinidad, on February 6 (during Arts Alive), from 6:30 to 8:00 p.m. The first copies of the book arrived this afternoon and it is filled with interesting and unusual pictures of Trinidad, a small fishing and resort community about half an hour north of Eureka. Our first shipment of this hard-to-find line of vintage cocktail book reprints sold out quickly at Christmas. We just got new copies in, and in time for New Year’s. These are very detailed facsimiles of rare cocktail books published from the 1860s to the 1940s, with new introductions by leading cocktailians. The publisher is a small outfit in New York. Amazon doesn’t sell these and you can’t get them at Borders or Barnes & Noble. Score one for the scrappy independent bookseller!

From the top, we have

Jerry Thomas. How to Mix Drinks, or the Bon-Vivant’s Companion (aka The Bartender’s Guide). First published in 1862. One of the first cocktail books, and an eye-opening look at drinks that are closer to rot-gut than to today’s artisanal cocktails. Consider #202: Gin and Pine. “Split a piece of the heart of a green pine log into fine splints…take 2 ounces of the same and put into a quart decanter, and fill the decanter with gin. Let the pine soak for two hours, and the gin will be ready to serve.” Of course, there are precursors to modern cocktails and instructions for making cordials. Hardcover. $30

George Kappeler. Modern American Drinks. First published in 1895 and written by the barman at a leading New York hotel. With jazz, cocktails may be one of America’s great gifts to the world (I suppose one should add democracy to the list too) and this book, while not well known, introduces 75 cocktails whose recipes were not previously published. Hardcover. $30

Robert Vermeire. Cocktails: How to Mix Them. First published in 1922. By the bartender of London’s Embassy Club. A good look at the cocktails popular during the Roaring 20s in London, and notable because the author reports the inventors of many drinks, information that might otherwise be lost to time. Hardcover with a dust jacket. $20

David Embury. The Fine Art of Mixing Drinks. First published in 1948, this is a reprint of the 1958 edition. Embury’s work is the classic guide to the cocktail and the beginnings of contemporary mixology. Opinionated and knowledgeable and as influential in the bar world as Julia Child was for American cooking. Hardcover in dust jacket. $30

William Boothby. The World’s Drinks and How to Mix Them. First published in Sacramento in 1891. This is a reprint of the 1908 edition. This is San Francisco’s big contribution to cocktails. Boothby worked in bars all over the bay area, was elected to the California state assembly, and went on to be the bartender at San Francisco’s Palace Hotel. Softcover. $20

Charlie Paul. American and Other Iced Drinks: Recipes. First published in 1902. Most notable for its many engraved illustrations of bar equipment. Card covers. $25

Frank Meier. The Artistry of Mixed Drinks. First published in Paris in 1936, and written by the bartender of the Ritz Bar, in the French capital. An attractive bar book, each page surrounded by a decorative red border. Softcover, $35

Harry Johnson. New and Improved Illustrated Bartenders’ Manual. First published in 1888, this is a facsimile of the 1900 edition. A true bartender’s guide, with information on cashing checks, mortgages, bookkeeping, as well as recipes for drinks. With Jerry Thomas, Harry Johnson was one of the two great bartenders of the 19th century. Softcover, $30.

Harry McElhone and Wynn Holcomb. Barflies and Cocktails. Published in Paris in 1927. McElhone was the proprietor of Harry’s New York Bar, in Paris – having had to leave his post at the Plaza in New York due to Prohibition.  Illustrated with delightful caricatures by Holcomb. Hardcover. $30

C. F. Lawlor. The Mixicologist. First published in 1895; this is a reprint of the 1899 edition. One of the few 19th century cocktail books to originate somewhere other than the coasts. This was published in Cincinnati. It may be the only bar book to include a drink made with ambergris, an intestinal secretion of the sperm whale (“Wedding Punch,” p. 21). The book has many ads for Cincinnati businesses, advice to young bartenders, and discourses on wine and other beverages. Card covers. $30

Ensslin, Hugo R. Recipes for Mixed Drinks. First published in 1916; facsimile based on the 1917 second edition. The final bartender’s guide from New York before Prohibition. Relatively little known, it turns out to be the source for more than 100 drinks in Harry Craddock’s Savoy Cocktail Book, *the* guide to cocktails from the Prohibition Era (and therefore published in England). Softcover, $20 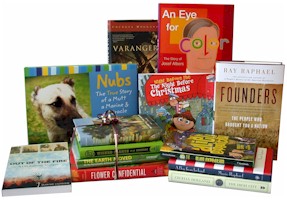 Still looking for gift ideas (or like me, just starting to think about them)? On Saturday, Eureka Books will be hosting about a dozen local authors who will be glad to inscribe a book to that special person on your gift list.

At 3 p.m., the adult authors will be in the store: Ray Raphael, Amy Stewart, Cecelia Holland, Terry McLaughlin, Linda and Matt Morehouse, and David Hobbs.

Natasha Wing is the author of the Night Before series, short rhyming picture books about the holidays. The Night Before New Year’s is her latest in the series. She is also the author of An Eye for Color, about the abstract painter Josef Albers. The New York Public Library recently placed the book on its list of recommended books for children.

Mary Nethery‘s most recent book, Nubs: The True Story of a Mutt, a Marine, and a Miracle, was featured on the Today Show and was recently #2 on the New York Times bestseller list (it’s #3 this week). This is a great story—and I don’t even like dogs.

Pamela Service is having great success with her latest line of chapter books (good for 8-12 year olds): the Alien Agent series, about a young boy who is sure he’s from another planet, is a lot of fun and is selling well nationally.

Marie Raphael has written chapter books suitable for teenagers. Her books are thoroughly researched but fictional stories about young immigrants coming to America at the turn of the 20th century.

Ray Raphaelhas been writing people’s histories for forty years. He’s written a number of books about Humboldt County, including Two Peoples, One Place, and he is the acclaimed author of four books about the American revolution—most recently Founders.

Cecelia Holland, from Fortuna, has been writing historical fiction since the 1960s and has nearly 30 books to her name. Her most recent are The High City, set during the Byzantine Empire, and Varanger, part of a Viking saga.

Terry McLaughlin, once an English teacher, now a Harlequin romance writer. Her latests, A Small-Town Reunion, is set in Carnelian Cove, a town remarkably like Eureka, somewhere on California’s Lost Coast.

Matt and Linda Morehouse run a publishing company in Arcata but in their spare time, they are cast-iron cooking enthusiasts. The will be here signing their book Cast Iron Cuisine. Now in its second printing.

David Hobbs, author of Out of the Fire: A Life Radically Changed, came to Humboldt State in 1965, fought fires for the forest service, was part of one of the first marijuana raids in Arcata, and then found religion. 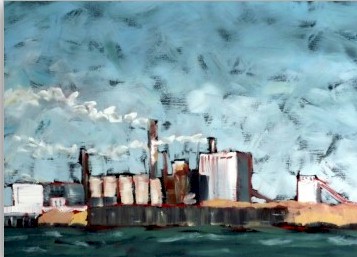 Since 1965 (if you can believe what you read on the Internet), the pulp mill at Samoa has been a fixture of the Eureka landscape. Now it's all but certain that the plant is closed for good, ending a chapter in our local history. Since the mill manufactured the raw materials for paper and Eureka Books is all about paper, we wanted to honor the mill in some way. Over the years, it seems most every artist in the region painted or photographed the mill, so to mark its passing, Eureka Books is holding a pulp mill art show in March. The show will open on Arts Alive, March 6, 2010, and will run through the end of the month.

We are accepting entries through February 1. Please drop off a photograph of your proposed entry (Eureka Books is at 426 Second Street, Eureka, CA 95501, across from the gazebo in Old Town) or email a jpeg (our email address is at the top of our homepage).