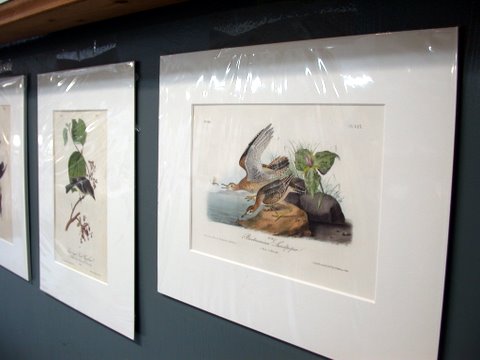 Come in for Arts Alive! to see original Audubon bird lithographs. These vintage prints were hand-colored under Audubon's supervision in 1840-1844. 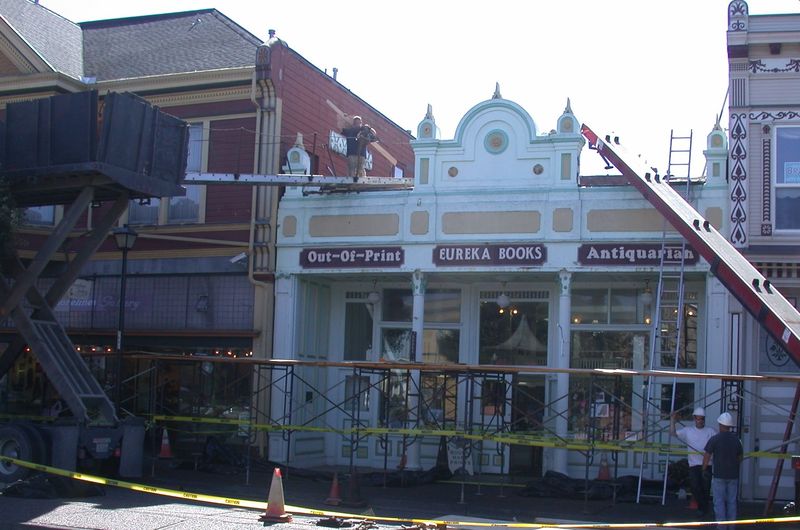 Eureka Books is open for business while roofers rip off the old, leaky roof and install a new one.  Come on in.  No hard hat required. 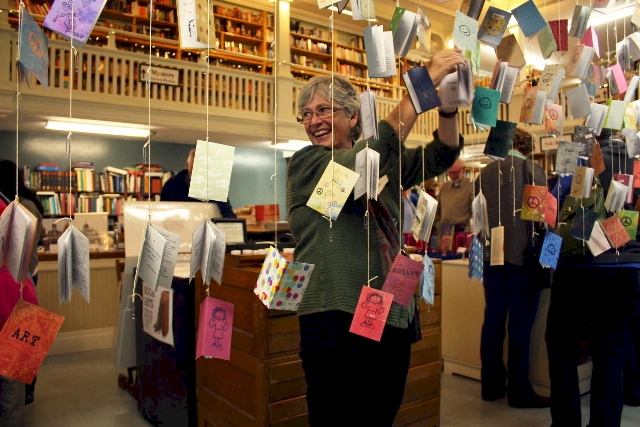 Book artist Sandy Vrem, harvesting some of the 1,000 books that members of the North Redwoods Book Arts Guild (norbag.net) made as a benefit for literacy here in Humboldt County. The books are $1 each, with all proceeds going to the Humboldt Literacy Project. Fewer than half remain, so come in and get some while they're still available.

(Photo by Ellen Golla, taken September 4, 2010, during the opening of the 3rd annual NORBAG show)


Found in a Bookstore

Now I know what those teenagers were doing with our movie titlers yesterday afternoon. 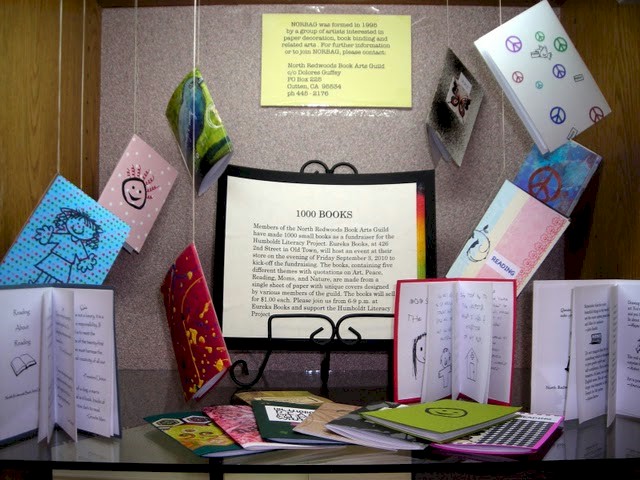 If you happen in to the Eureka branch of the library, you can see a display of some of the 1,000 books the members of NORBAG (the North Redwoods Book Arts Guild) have made to benefit the Humboldt Literacy Project.

On Friday night, September 3, from 6:30 to 8:30, we're hosting a party/reception for NORGAG and Humboldt Literacy Project, where the 1000 books will be unveiled and put up for sale, at $1 each. The text of each book is made from a single sheet of paper, cleverly folded, and then attached to decorative covers.

If you'd like to join us for the reception, please RSVP by calling the store (707-444-9593) or hitting the email link on our home page. Admission is free, but we hope you'll buy some books and support literacy here on the North Coast.


Dickens on Writing and Bookselling

I've been reading Oliver Twist this month, which is both comic and horrific at the same time, and you can feel the young Dickens exulting in his command of the English language and his growing confidence is palpable. High school English turned me off of Dickens for 30 years, but reading Drood, by Dan Simmons, rekindled my interest. This passage cracked me up:

"There are a good many books, are there not, my boy?" said Mr. Brownlow, observing the curiosity with which Oliver surveyed the shelves that reached from the floor to the ceiling.

"A great number, sir," replied Oliver. "I never saw so many."

"You shall read them, if you behave well," said the old gentleman kindly; "and you will like that, better than looking at the outsides,—that is, in some cases; because there are books of which the backs and covers are by far the best parts."

"I suppose they are those heavy ones, sir," said Oliver, pointing to some large quartos, with a good deal of gilding about the binding.

"Not always those," said the old gentleman, patting Oliver on the head, and smiling as he did so; "there are other equally heavy ones, though of a much smaller size. How should you like to grow up a clever man, and write books, eh?"

"I think I would rather read them, sir," replied Oliver.

"What! wouldn't you like to be a book-writer?" said the old gentleman.

Oliver considered a little while; and at last said, he should think it would be a much better thing to be a book-seller; upon which the old gentleman laughed heartily, and declared he had said a very good thing. 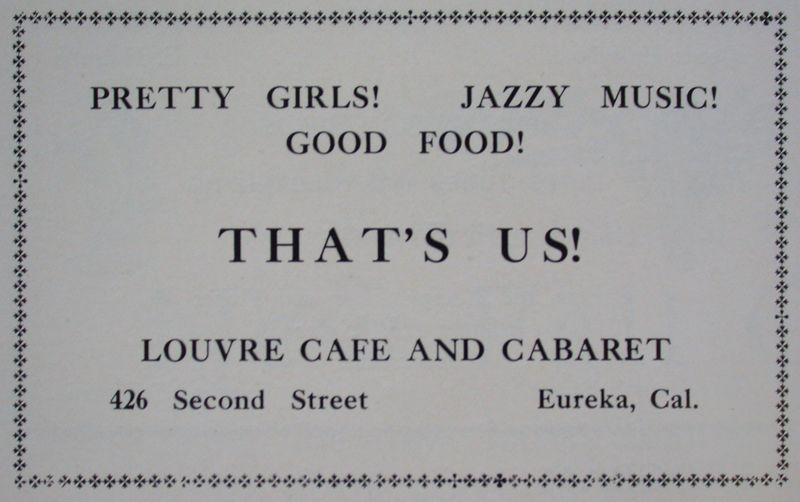 This is an ad for the restaurant and bar that used to occupy our building. I found this in a 1920 promotional brochure for Eureka. I'm thinking we should revive the Louvre slogan: Pretty girls! Jazzy music! Good books! That's us! Eureka Books * 426 Second Street, Eureka Cal.


Found in a Book

A newspaper clipping claiming to be "Bret Harte's First Poem, which was Written for, and Published in, the Humboldt Times," from July 25, 1857 (this clipping is a reprint from about 1905):

So noted for lumber and beautiful faces

There are dry goods and billiards, and shops where you victual

and every convenience—nor is it so little;

But once 'twas quite lost to the country around it,

And they called it "Eureka" to show that they found it.

(The rest of the poem is a rather forced rhyme about a drinking man and his bumbling attempts at wooing a young woman. I'll spare you, you've suffered enough already.)


Bookstore Cat in the House We just acquired an 80+ book collection of watercolor instruction books. These are virtually like new and most retail from $25 to $30. We’ve priced them from $10 – $15.